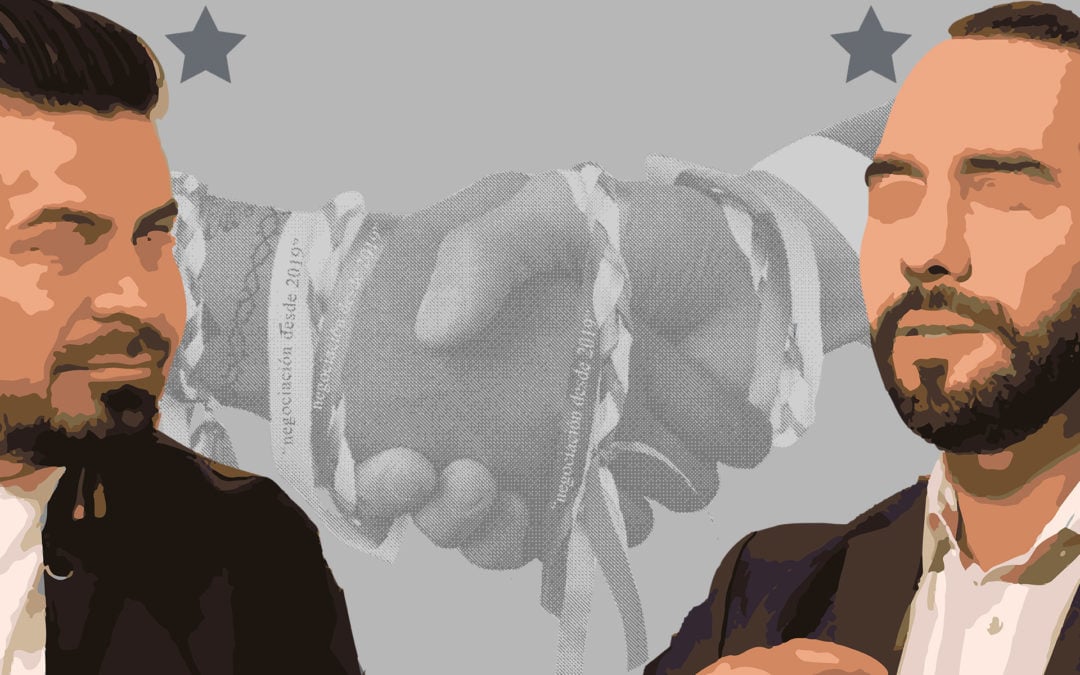 The FMLN, Bukele’s beginnings, and the gangs

In 2012, Bukele was a little-known FMLN politician and mayor of the small municipality of Nuevo Cuscatlán, where he still lives. Bukele’s rise in the party would be swift, but by that year, he still did not influence the FMLN leadership.

But the context is essential: Bukele won his first public office that year when his party’s government made its pact with the gangs, allowing more than 30 leaders of the three criminal structures to be transferred from maximum security to ordinary prisons so they could regain control and communication with their subordinates in the streets. This was known as La Tregua, and it would crumble in the context of the 2014 presidential elections when candidate Salvador Sánchez Cerén moved away from this strategy to maintain his popularity. After renouncing it as president-elect, he condemned the country to its most violent year, with a rate of 103 homicides per 100,000 inhabitants in 2015.

The FMLN, before the 2014 elections, continued to negotiate with gang leaders as a political institute, although its candidate publicly disdained any agreement. At that time, they negotiated votes for money and prison benefits, no longer in exchange for the lives of Salvadorans, as it was at the beginning. In that context, Bukele rose in the FMLN until he became mayor of the capital in 2015 and saw how its leaders built hidden agreements with gang members.

Mayor Bukele’s Pacts with the Gangs

Since the 2014 election campaign, the team of capital mayoral candidate Nayib Bukele contacted gang leaders to enter communities to campaign. The person in charge of these liaisons from the beginning was Carlos Marroquín, the current director of Tejido Social, who has led all negotiations with the gangs under Bukele’s command during his municipal and presidential terms.

After taking office as mayor, Bukele imitated what he had learned from his efemelenista leaders. During his administration, there were agreements with gang members that allowed him to campaign in specific communities governed by criminals to execute his flagship project of reorganizing some blocks of the Historical Center or to open the Cuscatlán market. As in previous pacts, this did not come for free to Bukele: his municipal administration handed out sales posts in the streets and inside the market at the discretion of gang leaders and hired gang members to provide security at the Feria Agostina, the capital’s festival. All of this could be reconstructed by El Faro thanks to wiretap audios, police surveillance reports, judicial records, and direct sources who explained the mayor’s office’s agreements with the gangs.

In 2015, the police mounted 50 «surveillance and monitoring operations» against gang leaders. In one of these operations, on December 21, 2015, investigators photographed Mario Durán and Carlos Marroquín (center), then councilman and employee of the San Salvador mayor’s office, respectively, with Renuente (left, in a plaid shirt), a Mara Salvatrucha leader.

One of the municipal officials captured in photographs during the police surveillance was Mario Durán, the current mayor of the capital and then Bukele’s councilman, who, together with Marroquín, held a meeting with an MS-13 leader, Renuente, who had participated in plots to assassinate Salvadoran politicians.

After splitting from the FMLN, Bukele assumed the presidency in June 2019 under the banner of the right-wing Gana party. As president, and on a much larger scale, Bukele would replicate what he did as mayor: secretly negotiating with gang leaders. This time, he took the dialogue to another level: to the national leadership of the three gangs.

In 2020, El Faro revealed that Bukele’s administration began negotiations as soon as he took office. Hundreds of pages from the log books kept by correctional officers in the maximum security prisons of Zacatecoluca and Izalco Phase III sealed and signed documents from prison security officials. Even the directors of those prisons showed that on different occasions, officials and even hooded gang members, led by Carlos Marroquin and the director of prisons, Osiris Luna, entered the prisons to hold meetings with gang leaders.

Prison intelligence officials, thanks to their informants and the interception of written messages that the leaders tried to send to their structures in the streets, discovered that in these meetings, they discussed a pact between the government and the gangs, very similar to the one executed by the Funes government in 2012, and with the same objective: to lower homicides in exchange for prison benefits. In 2021, this newspaper published, with documents from the Attorney General’s Office, evidence that the negotiations had occurred with the three gangs and that the government had tried to hide the documentary evidence after the 2020 publication. That publication included photos of Luna leading the hooded men to the meetings in Zacatecoluca.

A new prosecutor to hide the investigations

In the early morning of May 2, 2021, Bukele used the Legislative Assembly, which he has since controlled, to impose his attorney general and remove Raul Melara, who headed the institution that collected evidence of the government’s pact with the gangs. The imposed prosecutor, Rodolfo Delgado, not only destroyed the Anti-Mafia Group, which investigated these agreements with criminals and other crimes of public plunder but also persecuted the Attorney General’s Office officials who had investigated the pact with gang members. Most of them now live in exile.

On November 9, 10, and 11, 2021, 45 Salvadorans were killed during a shocking spike in murders. The data said that in those months, the average was around two homicides per day. The government’s pact with the gangs was faltering, and the Bukele government had to turn to gang leaders to send messages to their structures on the streets to stop the killing. In January 2023, El Faro published one of these audios, in which leaders of the Barrio 18 Sureños incarcerated in the maximum security prison in Zacatecoluca demanded that gang members on the street not respond to attacks perpetrated by other gangs. Police intelligence documents showed that the aggressions were initiated by MS-13, which had to do with the dissatisfaction of the free gang members for captures that occurred during the pact. After the gang leaders sent a voice message, homicides dropped sharply to the low figures they had before those days. The imprisoned gang members rescued the pact.

U.S. sanctions those who led the pact

After the publication of all the evidence of the negotiations between the Bukele government and the gangs, the United States publicly condemned them. The US Treasury Department imposed economic sanctions on Carlos Marroquín and Osiris Luna for having led negotiations with the leaders of the three gangs to reduce homicides and obtain electoral support from the criminals in the 2021 municipal and legislative elections, in which Bukele won. The US report added an element by stating that «financial incentives» were given to the gangs to comply with the homicide reduction. Bukele reacted on social networks with several messages in which, without directly denying the participation of Marroquín or Luna in the dialogue with gang members, he attacked the interim US ambassador, Jean Manes.

The most violent day of the century ended with the pact.

Between March 25 and 27, 2022, MS-13 killed 87 people, most of them without any link to that or any other gang. On Saturday 26 alone, 62 people were killed, making it the most violent 24 hours of the entire century. Bukele reacted by ordering his Legislative Assembly to decree a regime of exception that allows any soldier or police officer to imprison any Salvadoran he considers suspicious. The Army returned in full force to the streets. The Police Workers Movement denounced that daily capture quotas were established even in places with no gang presence. Several national and international human rights organizations criticized the excessive use of force, the deaths in prisons, and the capture of hundreds of innocent people.

In May 2022, thanks mainly to audio in which Carlos Marroquín was talking to an MS-13 leader during that bloody weekend, El Faro could reveal the reasons for that violent situation. Before the massacre, members of the police stopped a government vehicle in which MS-13 leaders were traveling and captured them. The gang gave an ultimatum of 72 hours for their release. When their demand was not met, they massacred 87 Salvadorans. That weekend, after almost three years of secret agreements between gang members and the Bukele administration, the dialogue ceased. The exception regime is still in force as of January 2023, and Bukele assures it will end the gangs. Over 60,000 people have been arrested in ten months, and all judicial processes are fully reserved. Hundreds of these people had no gang involvement. With many pieces of Bukele’s pact with the gangs yet to fall into place, there are enormous questions for the future: Will Bukele achieve his goal of ending the gangs? Do the gangs still have the strength to respond murderously as they did against the Sanchez Ceren government in 2015? Will they mutate into another type of criminal group?