«Being in that prison is like a concentration camp»: victims of the regime speak out / “Estar en ese penal es como un campo de concentración”: hablan las víctimas del régimen» 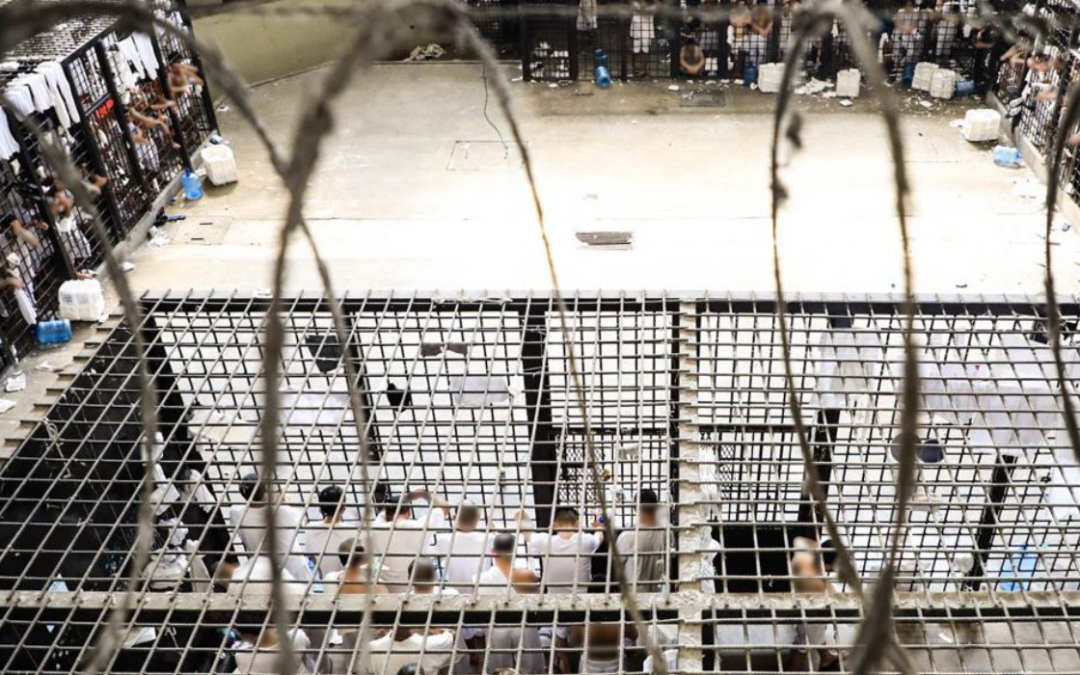 YSUCA also spoke with people who, for various reasons, have entered the prisons and have witnessed the conditions in which the detainees are held.

These are some of the testimonies…

It was midday on April 30, 2022, when Jorge was captured. It was near 75 Avenida Norte, in Colonia Escalón, in San Salvador. The PNC agents arrested him while cleaning the windshields of vehicles passing through the area. They interviewed him and took him to a nearby police station, making him sign a document, the contents of which Jorge did not know. After signing, he was released.

But that same day, at half past four in the afternoon, the police returned and arrested him again, this time because he was accused of being a gang collaborator and sent to the prisons of «El Penalito,» still in San Salvador.

He was kept in his underwear and was not allowed food or water. «Later, we learned that he had been transferred to a correctional center, but we did not know which one. Several days later, we found out that he was in the Izalco prison,» said one of his relatives.

Stripping men and women and touching their genitals with the argument that they are looking for drugs or instruments that can be used in prisons is the most common thing. It happens before entering the centers; it is part of the protocol.  Lidia also experienced it when she was a victim of the regime.

The atmosphere inside the prisons is oppressive; the sheets get too hot. The heat is unbearable from 10 a.m. until 4 p.m.

The cells are calculated for 78 people, but with the regime, they have been saturated with up to 170 people.

The guards threaten to use pepper spray, and when the inmates do not shut up, they carry out their threats. At 9 p.m., no one is allowed to utter a word, «only the crickets should be heard,» says Lidia. If anyone talks or converses with anyone else, they can be beaten by the guards.

Another punishment is not allowing them to go to the toilets. They bring them a bucket to relieve themselves. Until the bucket is complete, they take it out of the cell, and in the meantime, it remains among the almost 200 detainees in the cells.

Women hung by their handcuffs or sent to the darkroom or dungeon for «misbehaving,» which means having raised their voice to a custodian or those in charge of the cell. Making noise or laughing loudly may also be a cause for punishment. Prison directors even beat other women.

This happened to one of the women arrested in the Apanteos prison, where they were transferred when the Ilopango prison was closed. She took some quesadillas that arrived in a package for someone else.

She was beaten by the guard and even by the prison director. «They gave her a good beating, even the director of the prison, Mr. Milpa, hit the girl. A guard beat her; she was beaten by the guard. They left her in jail and told her that she would go from sector to sector». That was her punishment; it was a barbaric aggression, says someone who lived with her in the same cell. They took her to the punishment room and never saw her again.

The beatings and gas spraying have caused many pregnant women to lose their babies, as Lidia has witnessed. Other women have been unable to withstand the pressure they are subjected to in prison and have ended up in the psychiatric hospital. Others, in just months, have developed kidney failure and tachycardia; others have lost consciousness. The mothers, above all, cry when they remember their children, says Lidia.

When they are not punished for going to the bathroom, they leave each cell in blocks of 20 to use the 15 bathrooms in prison. They cannot go to the toilet when they need to do so. They have to wait their turn, which can take many hours.

All these conditions have serious consequences.

Many women entered the prisons healthy, but the harsh conditions of detention have deteriorated their health in a short time.

These benefits were obtained through the intervention of the Catholic Church, the Red Cross, and the Human Rights Ombudsman’s Office, says another detainee in one of the country’s prisons.

Sleeping in a cell is complicated, especially for those who have to sleep on the floor. They have to line up in a row, but because space is so tight, if one of them wants to turn around, they all have to turn around from the first to the last in line.

They wash their clothes until they are 4 or 8 days old, and to bathe, they must do it with three buckets of water; there is no more. At least in the prison where Lidia was held, there was water to drink, although it was scarce.

Laura «did not know she was pregnant,» says Lidia, «because her stomach had not grown. She went into labor pains in cell 4 of sector 5. They took her to the hospital and returned her the same day.

Once they have their babies, the women are transferred to the «Granja» (farm), another area of the Izalco prison, where pregnant women or those who have had their babies are held.

The State is responsible for protecting the rights of the newborns in the prisons, minors who have not committed any crime, says a psychiatrist with whom YSUCA spoke.

The State should make public the conditions in which mothers and their children are held in prisons due to the emergency regime.

The doctor, who spoke anonymously, confirmed cases of pregnant women arrested under the regime who have given birth in the prisons. Others are taken to the hospital and return to the Izalco prison with their babies. According to the psychiatrist, this condition generates stress in the mothers, which the newborns acquire. But who will respond for the health of these children, and what about the «Nacer con Cariño» (Born with Love) Law, the doctor asks.

The rights of children and women are doubly violated inside prisons. In the Ilopango prison, when women had not yet been transferred to other jails, Lidia learned of a case of a woman who died. «A woman died in Ilopango, in the maternity ward. When they get tachycardia, don’t think the guard comes out running, even if you say emergency. No, the guard doesn’t care,» says Lidia.

Isabel has had several strokes. She is a little over 40 years old, says Lidia.  She has not been able to bear missing her 12-year-old daughter so much.

Lidia would encourage her, «she must be strong,» she would tell her. But in the prisons and current overcrowded conditions, which have increased due to the emergency regime, words are not enough.

What hurts the most inside, says Lidia, is when a new prisoner enters the prison with the news that there is another extension of the emergency regime.

The treatment given to those captured during the exception regime is unjust and violates fundamental rights, says Father José Maria Tojeira in his article «Privados de libertad y justicia» (Deprived of freedom and justice).

Tojeira adds that «putting the detainees’ health at risk, beating them and isolating them are serious violations of human rights regulations» (…) They are people, not collateral damage in a supposed war in which the victors have the luxury of razing the enemy to the ground, whoever falls.