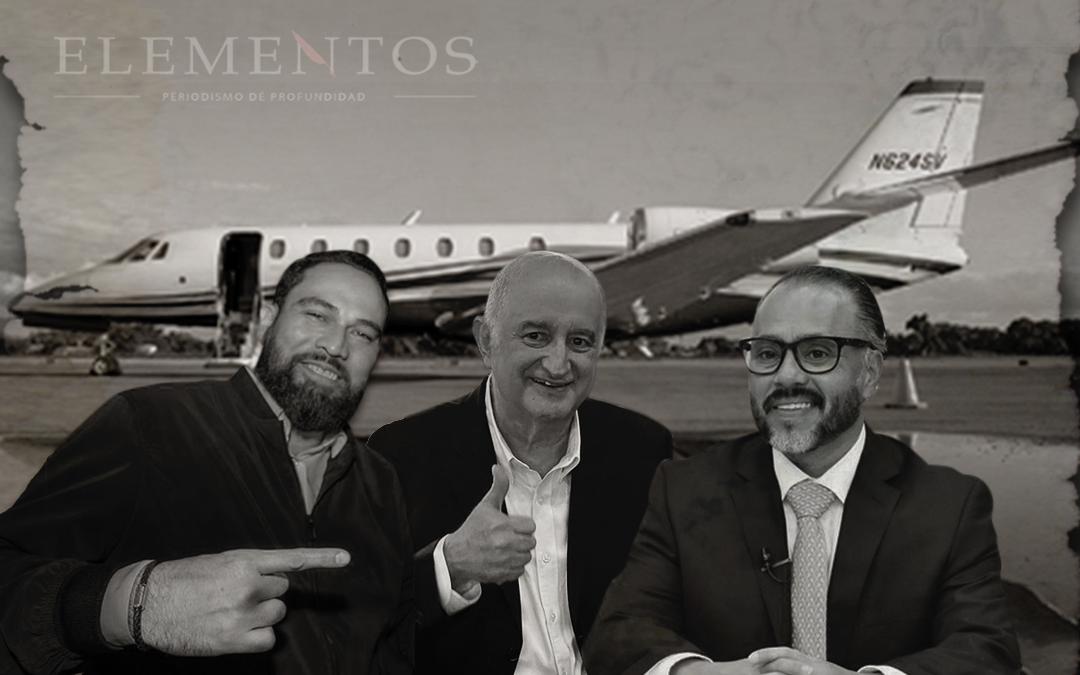 Ernesto Alfredo Castro Aldana, president of the Legislative Assembly, and Mario Edgardo Durán Gavidia, mayor of San Salvador, returned from San Pedro Sula, Honduras, on December 3, 2021, aboard the private plane registration number N624SV that landed at the Ilopango airport, according to the aircraft, crew, passengers and luggage records made that day by agents of the Anti-Narcotics Division of the National Civil Police (PNC), and that was captured in an email, with two attached documents in. doc and .xls formats, which were provided by Distributed Denial of Secrets (DDoSecrets) to Revista Elementos.

At the end of September of this year, cyberactivists grouped in the group called Guacamaya obtained, through a hack, more than ten million emails from the PNC and the Ministry of National Defense (MDN), as well as from other public security and military institutions in Latin America. The hackers then turned this information over to DDoSecrets, which shared it with dozens of civilian organizations and media outlets, including Elementos.

On December 3, the DAN counted thirteen private aircraft, including the one that transported officials allied with the government of Nayib Bukele and Mexican businessmen Bruno Maximiliano Castillo, Martín Alejandro Ochoa Valenzuela, and Roy Campos Esquerra. The aircraft is owned by TVPX Aircraft Solutions Inc., based in North Salt Lake, Utah, United States.

Between August and December 2021, no deputy participated in official missions abroad paid with public funds, according to a note signed by Arturo Ernesto Mossi Henríquez, information officer of the Assembly.

The Assembly’s press office requested an interview with Castro to ask him who paid the costs of this trip, but there was no answer.

In the minutes of the San Salvador council sessions, Durán did not report that he would travel to Honduras on a private flight with three Mexican business people.

In minute number 22 of October 21 of that year, the councilors permitted Durán to participate in the 19th General Assembly of the Union of Ibero-American Capital Cities in Madrid, Spain.

In minutes 24 and 25 of November 12 and 29, 2021, respectively, it is recorded that the mayor is «absent.» However, there is no explanation of the reasons for these absences that temporarily coincided with the holding of the general elections in Honduras in which the current president Iris Xiomara Castro Sarmiento, triumphed.

In the following council sessions at the end of the year, Durán continued to be «absent.» However, on December 13, Durán received the Honduran mayor Jorge Aldana of the Libertad y Refundación party, controlled by Castro and her husband, former president Manuel Zelaya.

An interview with Durán was also requested, through the mayor’s press staff, to ask him about the costs of the flight and the purpose of the trip to the neighboring country. There was no response either.

Wilson Sandoval, from ALAC-FUNDE, clarified that a flight of this nature is not illegal in itself unless, once more information is found, it is discovered that the business people made the payment as a gift. He also recalled that in recent years similar cases occurred, such as the case of former President Carlos Mauricio Funes Cartagena, who traveled more than 40 times in private planes with businessman Miguel Menéndez or, as also happened with former Attorney General Luis Martínez, who received bribes from Enrique Rais.

He also warned that the emoluments of an official, such as Castro or Durán, are not enough for such flights.

Eduardo Escobar of Acción Ciudadana pointed out that there may be a conflict of interest because the businessman «or any other person has, in the short or medium term, an interest.»

«And we already know that a conflict of interest gives way to corruption,» he said. He also considered it necessary to inquire into the patrimony of the officials to determine if, on their own, they have enough money to pay for a flight «of thousands of dollars.» «In the past, we know that, when this situation has occurred, it is because it responds to the payment of favors or the search for particular benefits,» he concluded.

Roy Campos Esquerra is the other passenger on the private flight to Honduras. He is president of Consulta Mitofsky and was one of the members of the campaign command that brought Nayib Bukele to power in 2019. His role, at the time, was to serve as an international analyst alongside compatriot Carlos Penna of TRSearch.

Mitofsky, with relative frequency, publishes opinion poll results in which it presents Bukele as the best-evaluated president worldwide. This is often picked up by the government-controlled media and presented as news.

A direct message was written to Campos Esquerra’s Twitter account to interview him for this trip, but there was no response at press time.

On December 13, 2019, and August 17, 2022, the company Proyectos y Construcciones Lief El Salvador granted general administrative power of attorney to Ochoa Valenzuela, as can be verified in the corporate instruments registered in the commercial registry of the National Registration Center (CNR). This document allows whoever is granted it to exercise broad powers over its client’s assets, such as renting properties and paying taxes.

Lief El Salvador was founded on May 8, 2019, before the notarial offices of Nuria Elizabeth Serrano Alguera, as an extension of the Mexican company Proyectos y Construcciones Lief, according to the articles of incorporation filed with the CNR. The businessman Alfredo Carrascosa Fernández arrived in the country to find it.

No public contracts were found to prove that Lief El Salvador works for a Salvadoran state institution.

Castillo, in the Mexican commercial registry, appears related to two companies: Maxtin and Lucamax. He is the son of Luis Carlos Castillo Cervantes, alias El Rey de Los Dragones, a construction businessman who, in mid-November 2016, was captured in Texas, United States, to be tried for money laundering, bank fraud, bribery of officials, embezzlement, theft, and embezzlement of public resources from the Mexican treasury.

Almost a year later, in the trial against him, the father of Castro and Durán’s traveling companion confessed to the Southern District Court that, between 2005 and 2006, he had won contracts at inflated prices to pave highways and, in exchange, had paid «tens of millions of dollars» in bribes to the governors of different Mexican provinces, including trips in his Learjet 45 aircraft.

Flights in private planes are a recurrent practice by government officials and other public institutions. On June 21, 2019, Bukele traveled to Mexico to meet with his counterpart Andrés Manuel López Obrador in the Bombardier Challenger 300, registration XA-EZI, owned by the gas company TOMZA. The president was also recorded on Saturday, December 3, 2022, landing at Juan Santamaría airport, in Costa Rica, in the XA-ARR aircraft, with the Mexican flag.

On November 10, 2019, it transcended social networks that Osiris Luna Meza, director of Penal Centers, had traveled to Mexico in a private plane with a woman who was identified as an employee of the same institution. From the very beginning, the government refused to disclose the details of this flight, despite persistent pressure from public opinion.

Almost five months later, former President Funes Cartagena published in his social media accounts that the costs of the trip were paid by the Mexican company Grupo Seguritech Integral Security. This year, El Faro.net published that the flight had cost $27,000.

Bukele and his officials are only some of the first to travel on private flights with business people. El Faro.net documented that former President Funes made 40 flights with Menéndez, who at the time had become the primary provider of personal security services for executive branch institutions.